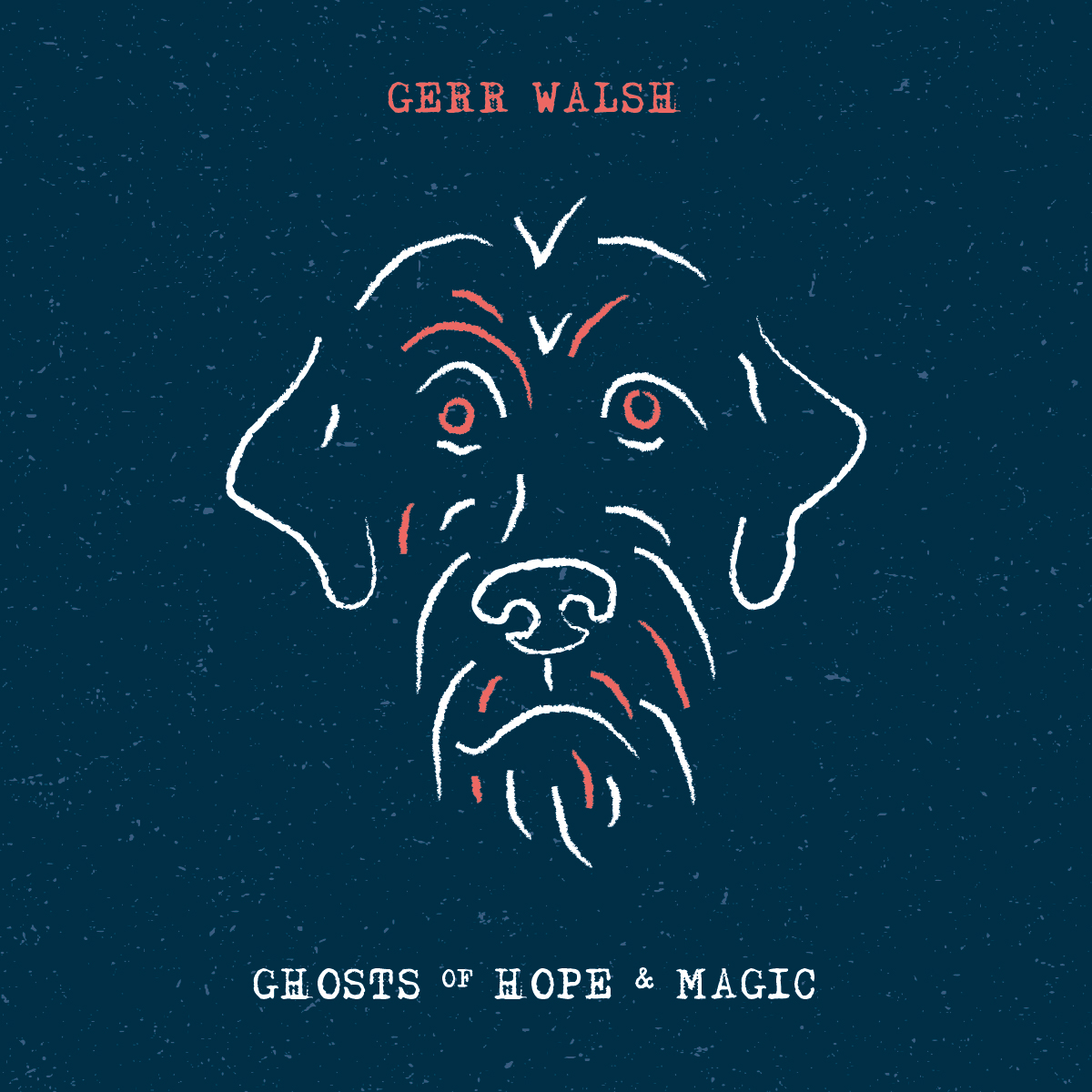 The Story of
‘Ghosts of Hope & Magic’

The journey of making and releasing this album was such a thrill for me, so many unexpected and overwhelming memories, I just wanted to put it down somewhere as a kind of scrapbook journal for myself and anyone else that might be interested.

The album was recorded at Audioland Studios just outside Dublin in Leixlip, Co Kildare. We began in December 2020 just as the world was beginning to deal with a little thing called Covid. Anthony Gibney was our host at the studio and also our engineer and co-producer.

We had some amazing musicians with us for these recordings I have no doubt that they elevated this album with their experience and talent and I’m forever grateful. 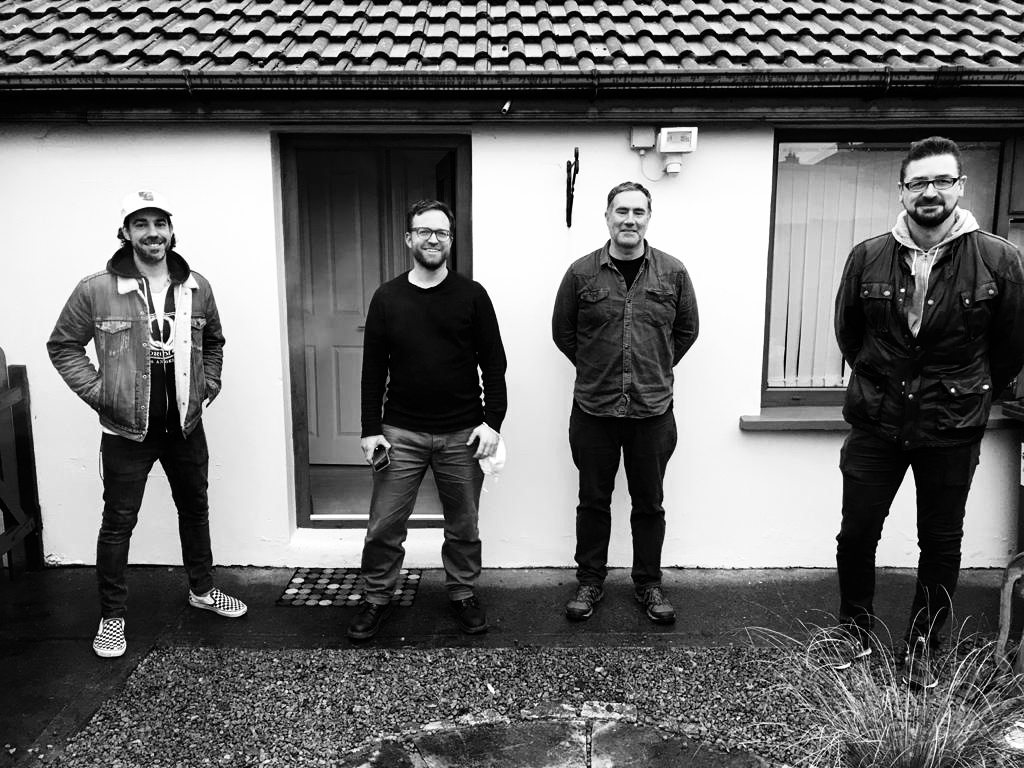 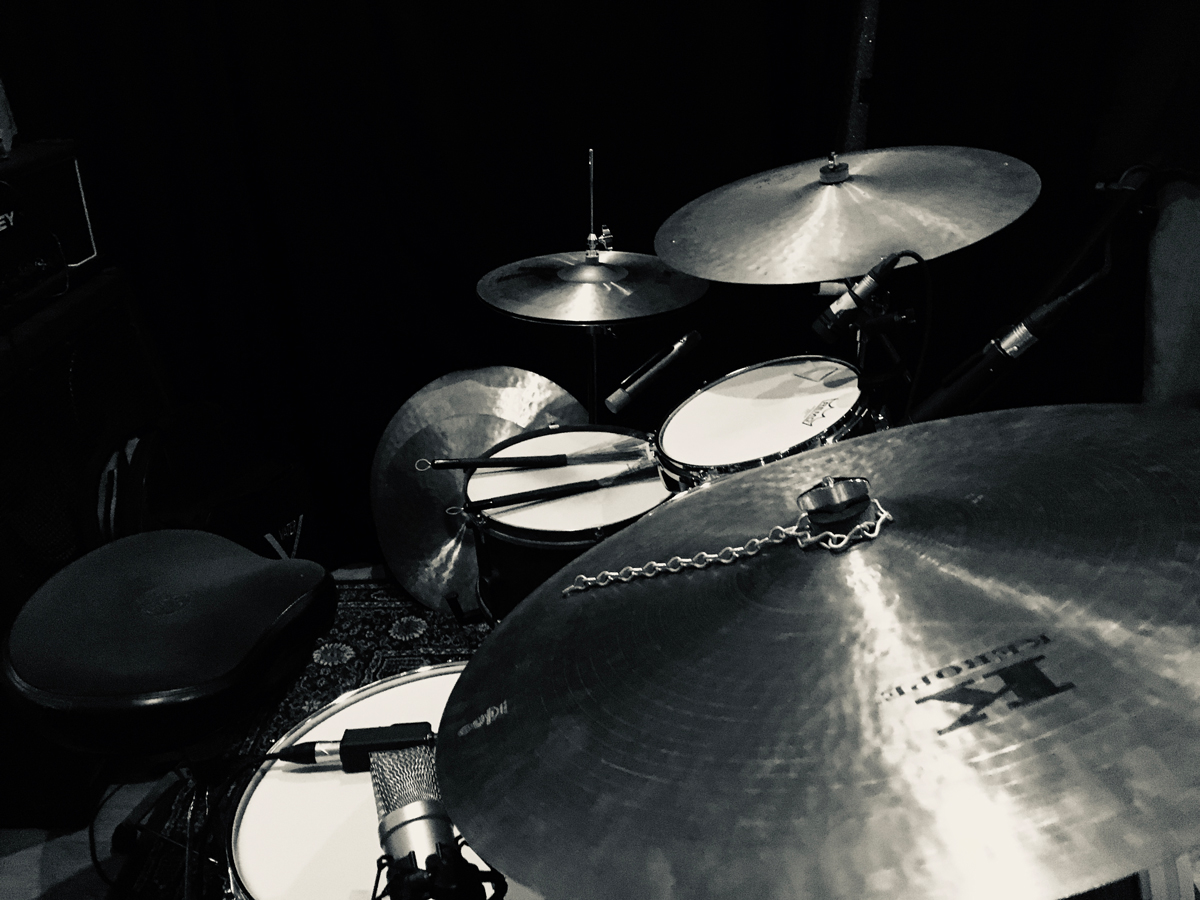 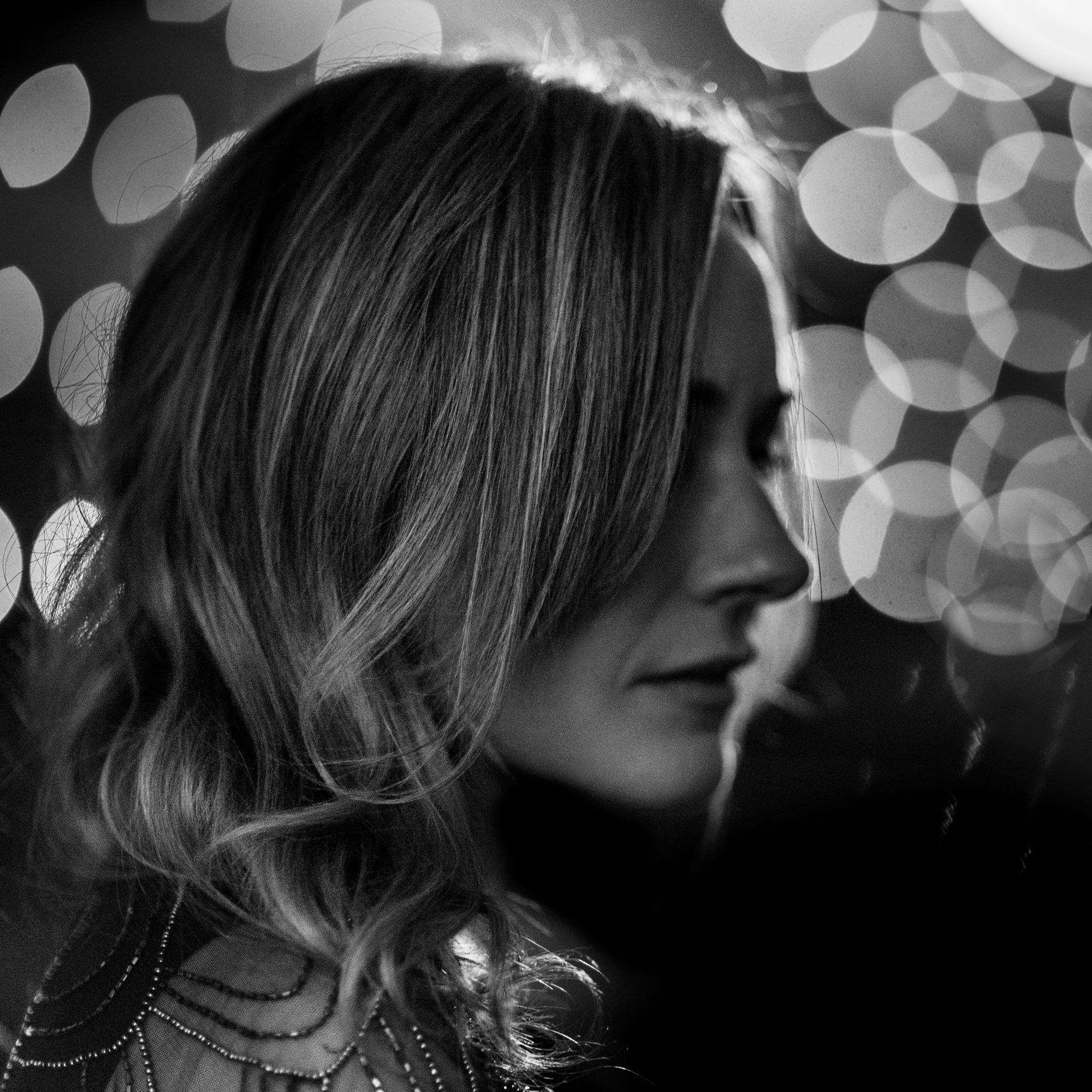 On Keys/Piano we had Max Greenwood who has played with many great artists including, Jack L, Mundy, Jerry Fish and Tom Baxter. On Bass we had Keith Duffy, a very familiar name to anyone in the music industry on this island, working with such artists as The Corrs and Van Morrison.

On Drums we had Adam Marcello who has played with everyone from Brandi Carlile and Tim Burgess to Katy Perry. On Backing Vocals we had Naimee Coleman who apart from having her own impressive solo career has worked with Robin Gibb from the Bee Gees and Howard Jones.

We got the basic tracks down in the first week and then recording took another 5 months due to the world ending temporarily and also a lack of direction on my part. We got a few extra musicians to contribute remotely over the following months, Tom Portman on Lapsteel, Katherine Atkinson on Violin, Adrian Murphy on Flute and Dave Duggan also on Lapsteel. Finally we had the mixes completed by Summer ’21 and then the final step of mastering was provided by Pete Maher and Simon Francis. 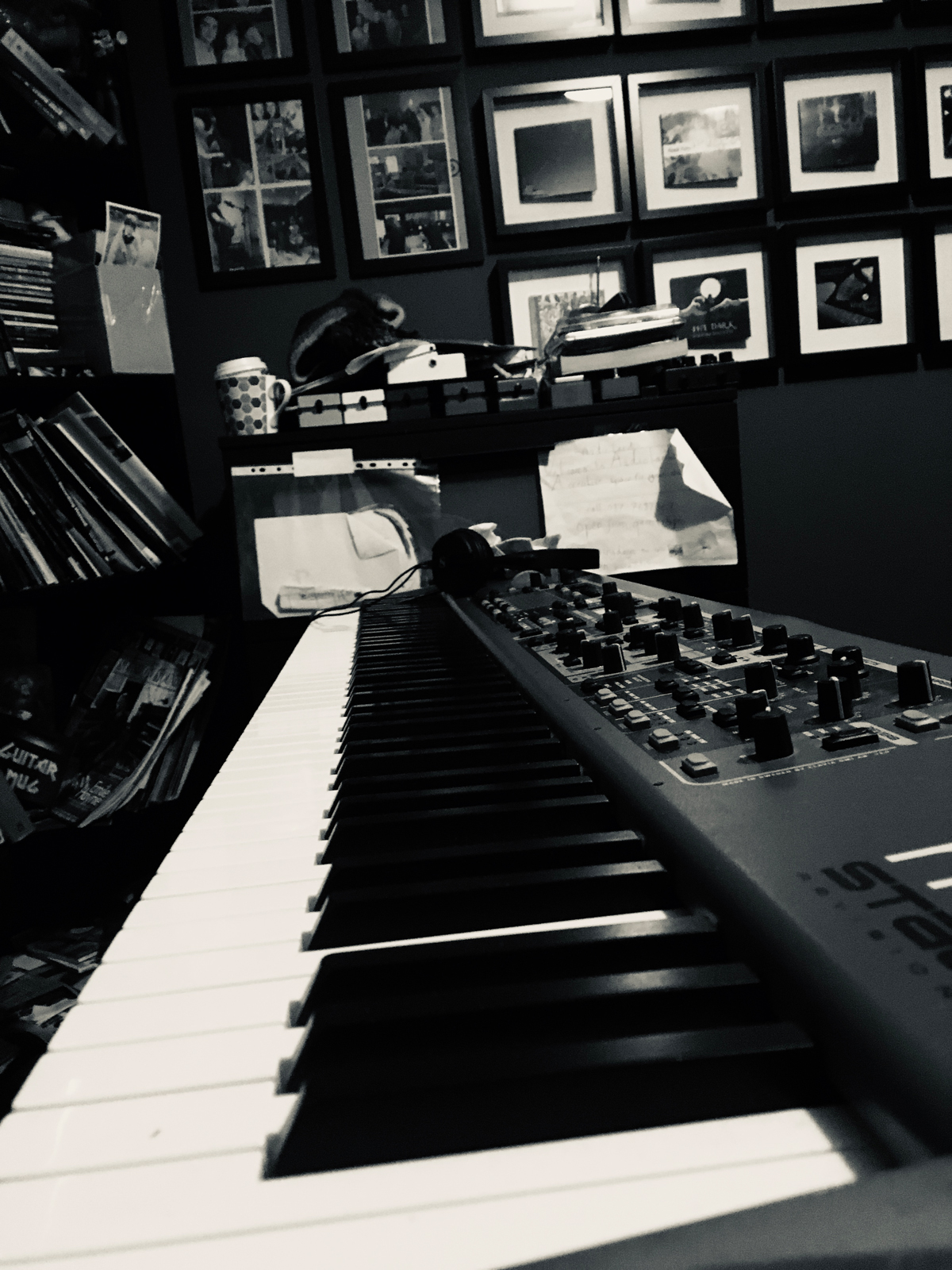 ‘Strays’ was released on 26th September 2021, the first single from  the album campaign. The reaction and feedback to the single was quite unexpected, I am a DIY musician with no PR or Management company behind me so to get such positive praise and radio coverage was a real thrill and testament to the work we had put in during the recording process. Credit goes to Anthony Gibney for always pushing for perfection in the songs during recording and mixing.

‘Strays’ received a slew of plays over the coming weeks on RTE Radio1, Today FM and many regional stations by DJs such as Fiachna ó Braonáin, John Creedon, Ronan Collins, Lilian Smith and Cathal Murray. I managed to get myself a feature article on the recording of my debut album on the RTE.ie website www.rte.ie . The single was picked for the RTE Radio1 Recommends Playlist three times over the next few weeks, reaching No.2 in the RTE Radio1 Airplay charts. 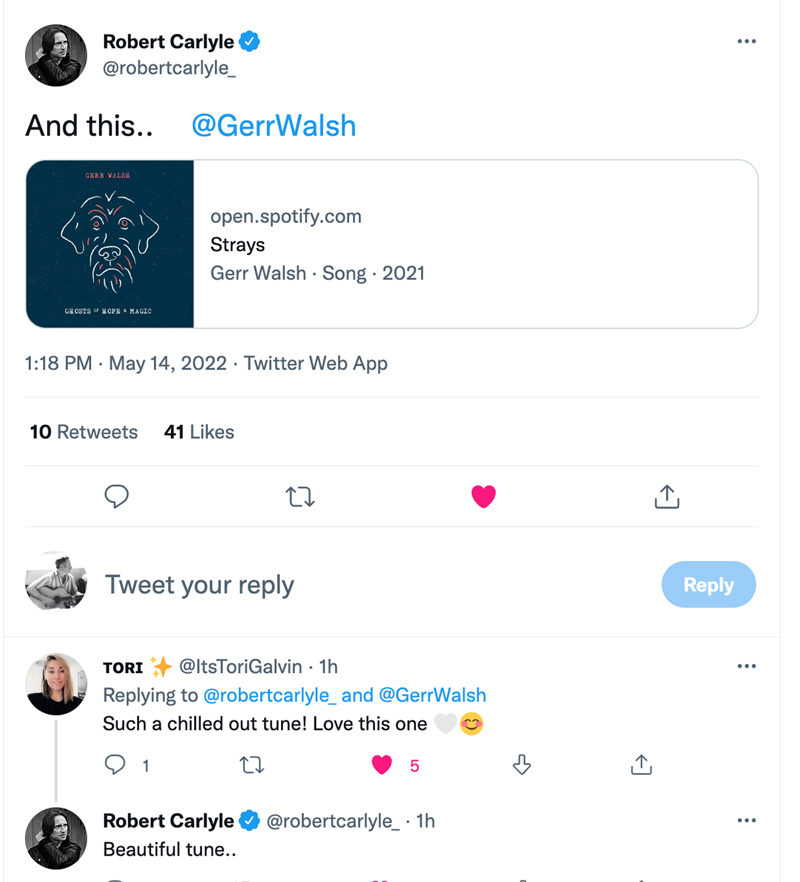 Another lovely out-of-the-blue moment popped up months later on a random Saturday in May when actor Robert Carlyle tweeted ‘Strays’ as part of his pick of indie artists for the week. Robert has long been a supporter of unsigned or independent artists on twitter. He then went on to include ‘Strays’ in his top 50 tracks of ’22.

‘Ghosts of Hope & Magic’ was launched on October 26th 2021 for digital download and streaming.  To celebrate I did a livestream launch on Youtube.

I had wanted to do a real live gig but Covid had other plans, I would have to wait ’til February 2022 to do a proper launch gig at The Bello Bar in Dublin. It turned out to be a real magic night, people came because they had really missed the live music experience but also to celebrate being together in a crowded room again.

The Album was reviewed a few weeks later by non-other than Tony Clayton Lea in The Business Post on Sunday 7th November – Link here. This was a first for me and a real pinch myself moment, one of those times that I wished my parents were still around to see it. Thankfully it was a good review, nestled in between reviews of Abba and Ed Sheeran. 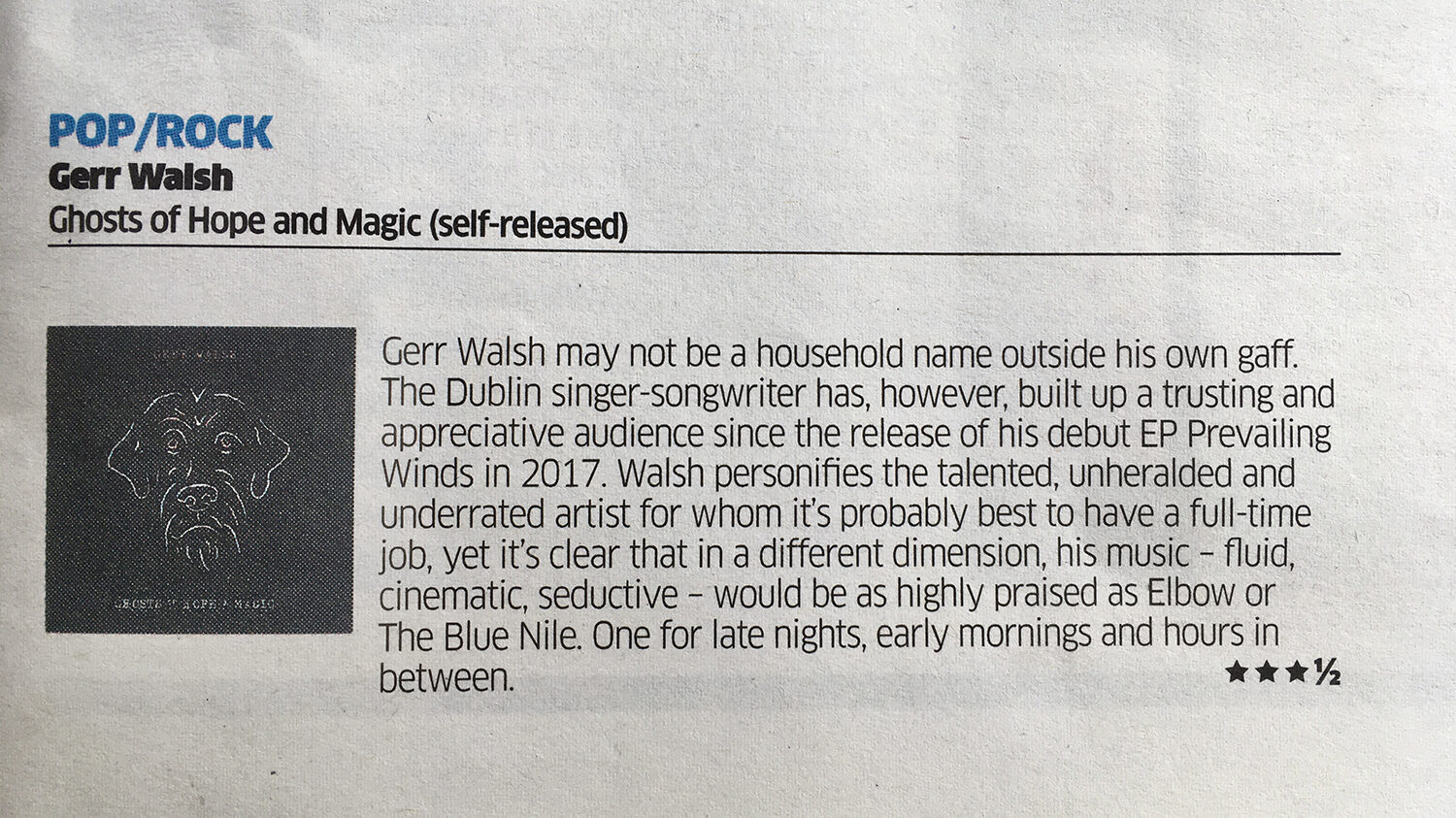 ‘Brighteyes’ was released on 24th February 2022, getting some great airplay on RTE Radio1 and regional stations and even getting a few plays as far a field as Atlanta, Georgia USA.

A few months earlier we were very kindly invited up to Derry by Donal Scannel to perform ‘Brighteyes’ for a TV show called ‘Ireland in Music’. Myself, Max Greenwood and Naimee Coleman frolicked among the trees in St. Columbs Park on a beautiful sunny day as the cameras danced around us, you can watch it here (39 mins in). It finally aired in April ’22. 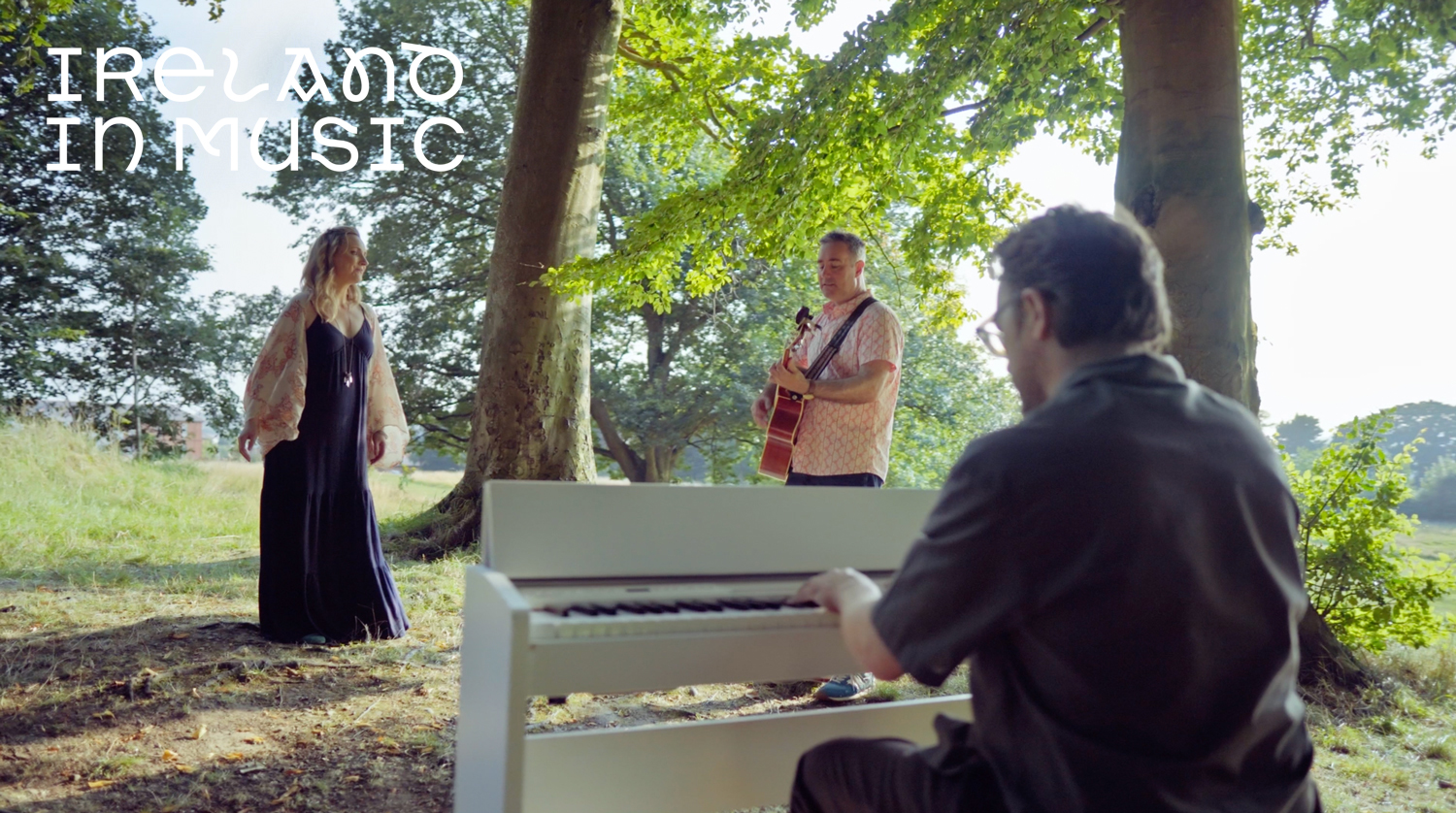 ‘Sleeping Giant’ was released on 27th May 2022, again getting some great airplay on RTE Radio1 and regional stations, making the RTE Radio 1 Recommends Playlist and making it to No.7 on the RTE Radio 1 Airplay Charts. 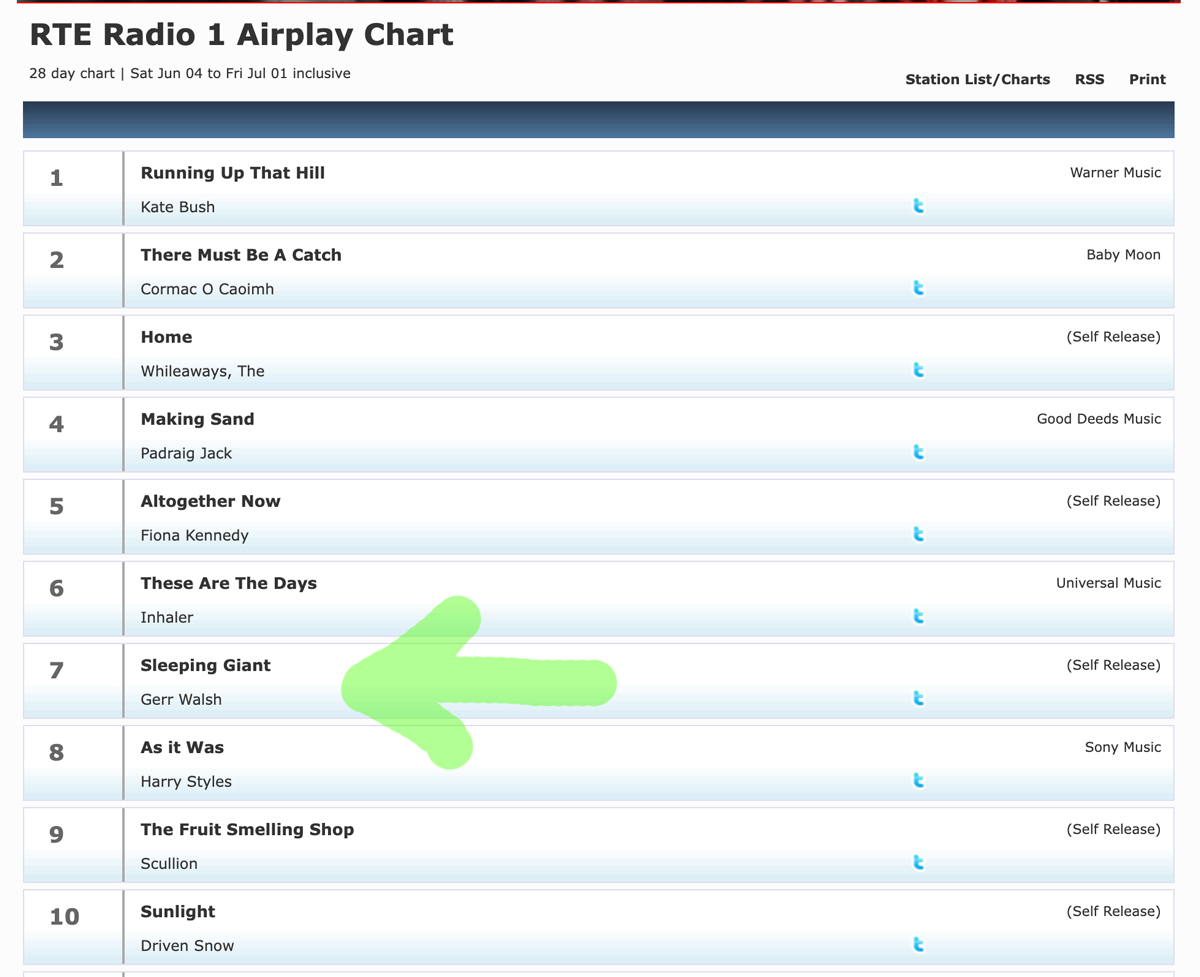 Sleeping Giant includes the backing vocals of Naimee Coleman who appears on at least half of the album, her vocals always seem to lend a beautiful otherworldly feel to my songs.

Most of my videos are DIY jobs, sometimes using stock video and sometimes my own footage and graphics, the video for ‘Sleeping Giant’ was a mixture of both. The rabbit in the video is not a real rabbit! it’s me with a mask on, filmed by my daughter in our very own back garden.

I wanted to do something different for this song, it’s a very visual song and I felt that the video should reflect that and also elevate the feelings behind it. I approached a friend of a friend – Síana O’Connor who’s videos and pics I had admired on Instagram for a while. She loved the song and was excited to try and come up with something fitting.

I’m so happy with what she captured for the video, it’s so peaceful and relays a hidden part our natural surroundings that we often don’t see, all filmed around the outskirts of Dublin. Thank you Síana!

‘M50 Song’ was released on October 26th 2022, exactly a year after the album was released in 2021. It was well received by radio stations getting plenty of airplay again on RTE Radio 1 and again making the ‘RTE Radio 1 Recommends Playlist’. 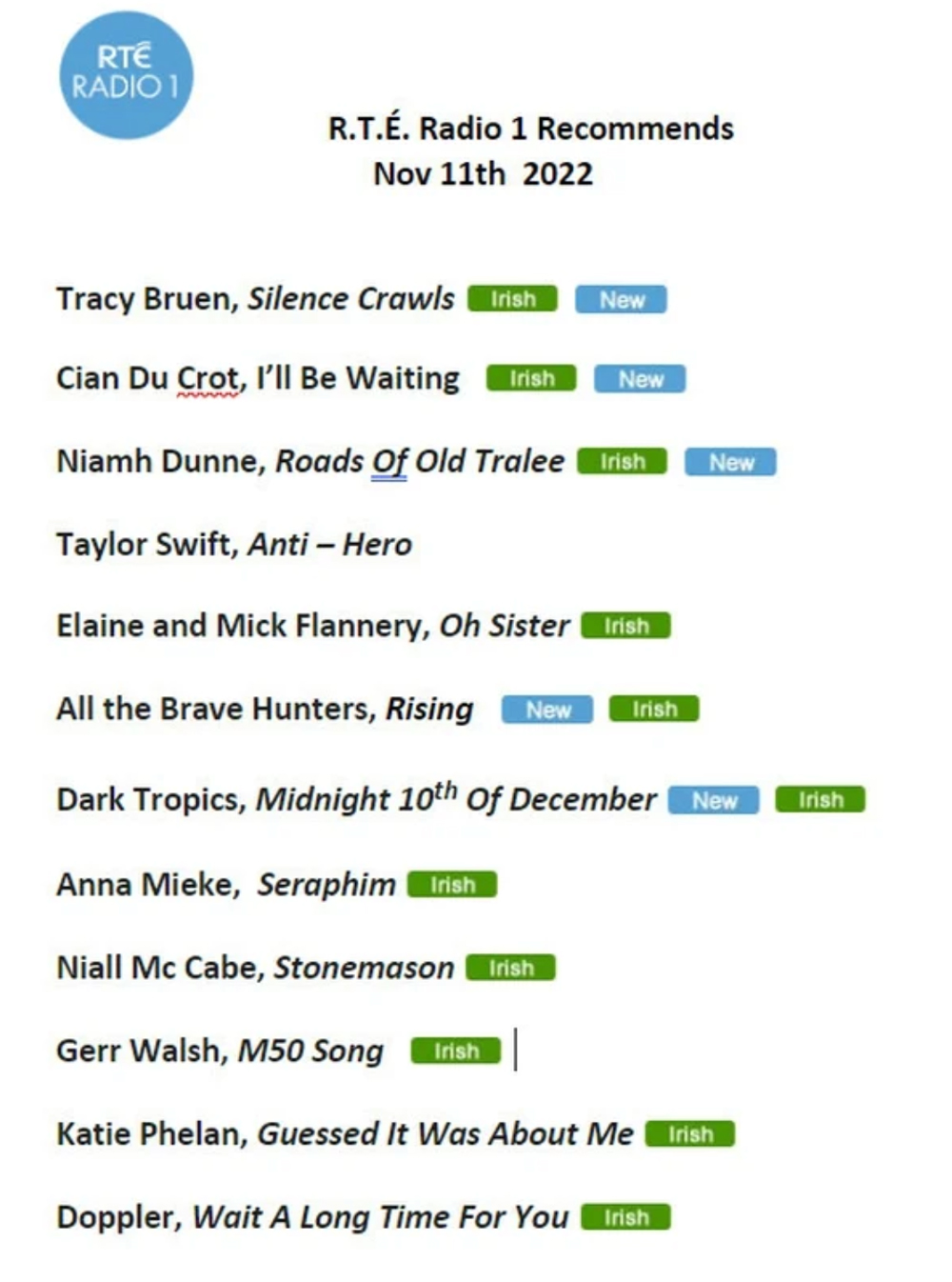 And so we come to the end of what was my album journey and what a trip it turned out to be. I’ll never forget the emotional twists and turns this album brought me through, I’m very proud of what we achieved from piecing the songs together in my head to recording them in the studio with world class musicians to hearing those same songs broadcast back to me live on my kitchen radio, there really is nothing quite like it. 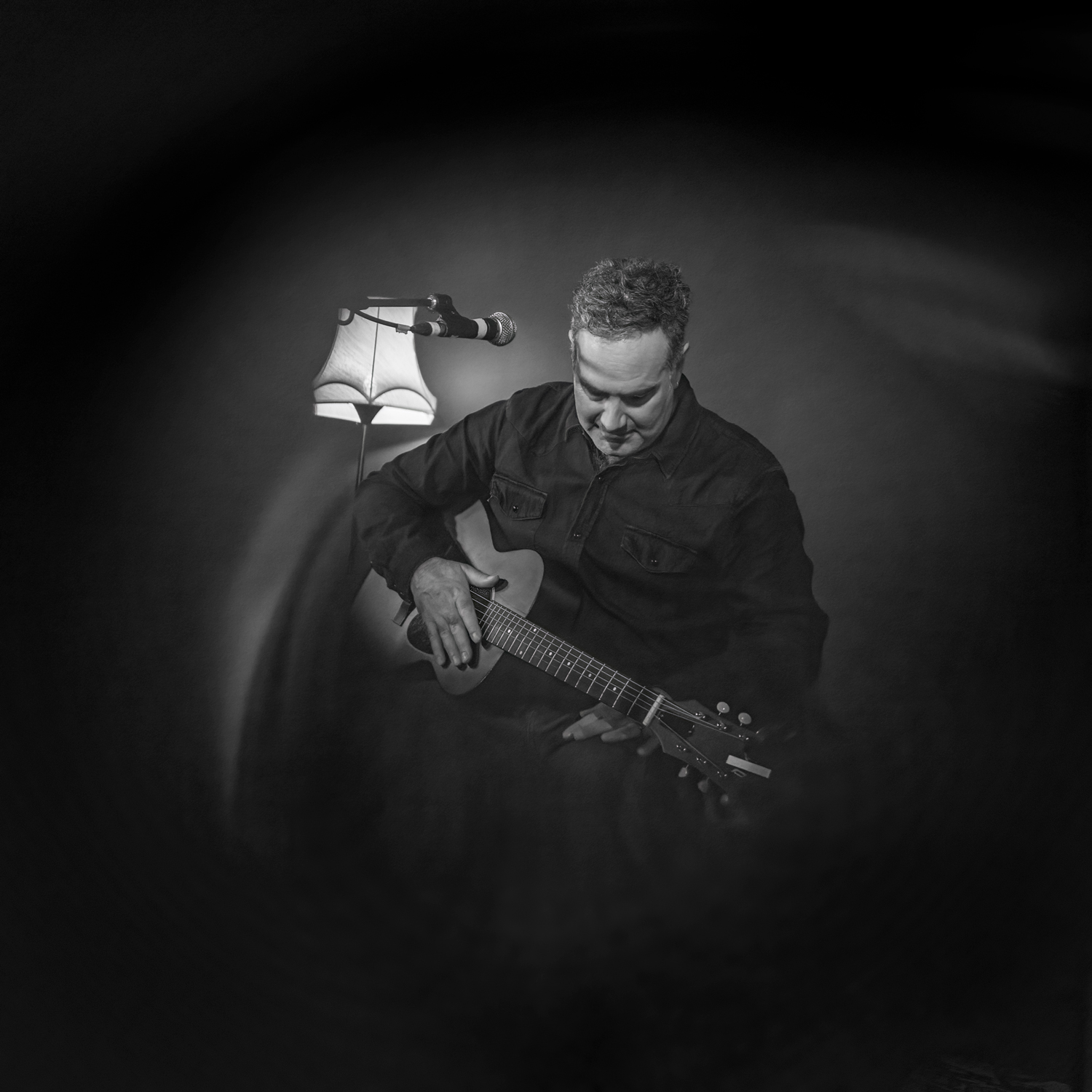 Big big thanks to everyone who helped me conjure this thing into being, Max Greenwood, Naimee Coleman, Adam Marcello, Keith Duffy, Anthony Gibney, Katherine Atkinson, Aidan Murphy, Tom Portman, Dave Duggan, Will Wilde, Simon Francis and Pete Maher. I’d also like to thank my wife Niamh for her patience and unwavering belief in me and my music.
X Gerr

your very own copy of the album 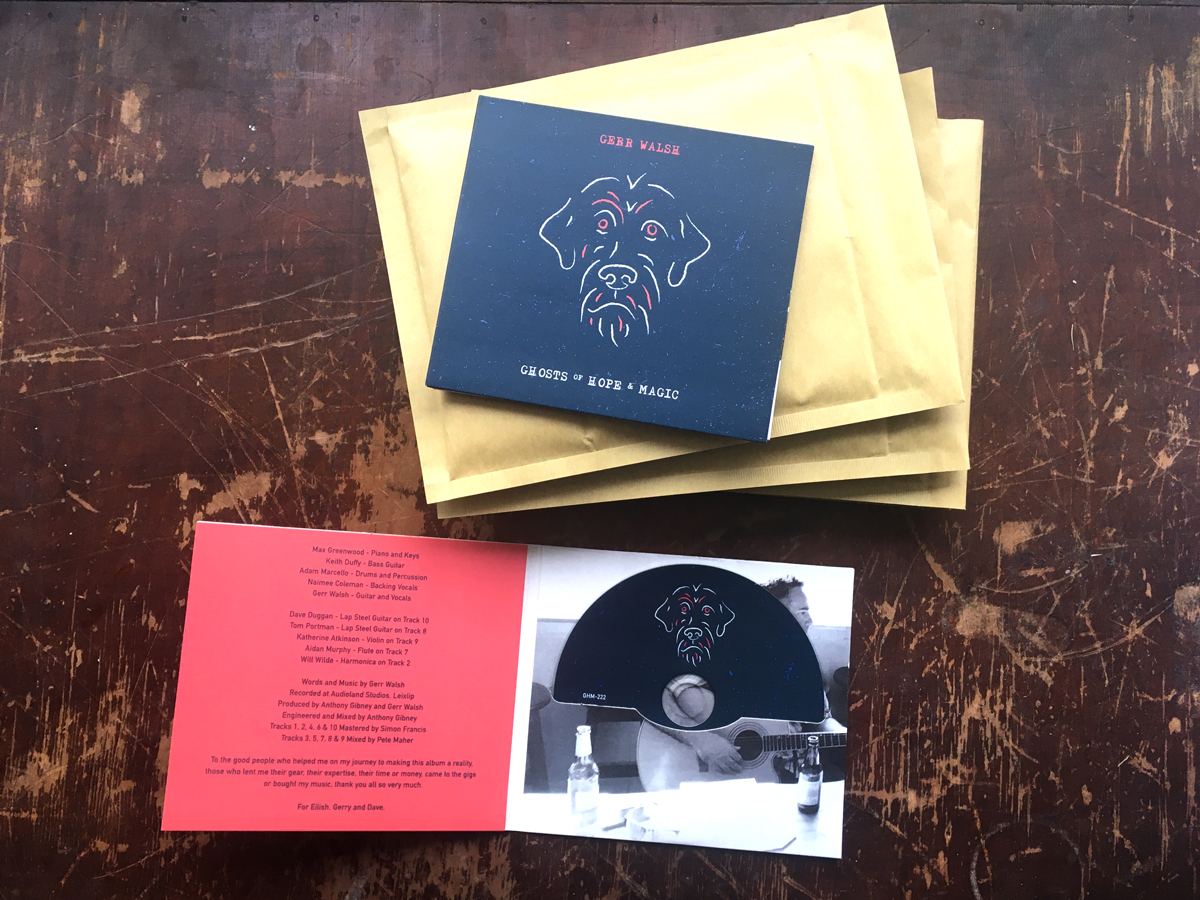 Grab yourself a piece of this physical manifestation of my creative escapades over 10 years. The limited edition first batch of ‘Ghosts of Hope & Magic’ on CD signed by myself with a little personal message. I will post it out to you as soon as my feeble little Irish hands can get to work packaging the whole thing together for you, so far I’ve posted everywhere from California to Tokyo. The button below will bring you to my Bandcamp site where you can order, don’t be a stranger!
ORDER HERE